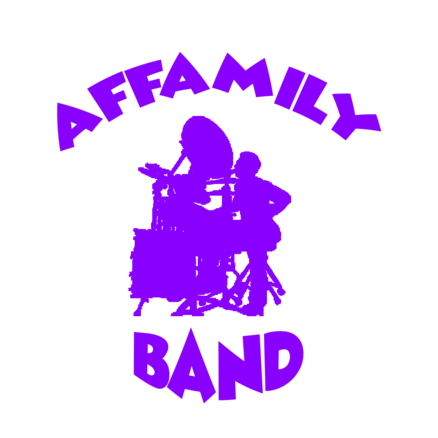 ​Jaime Affoumado, aka, Jaime Aff founder and leader of THE AFFAMLY BAND,  has lived a life surrounded by music and the theater.

Born to Pianist and Composer Ralph Victor Affoumado and Rona Nadine Affoumado in the Bronx, New York City on July 29,1965, Jaime has been surrounded by artistic, creative people since birth. His Dad continues his long and successful music career, composing music for Broadway, TV, commercials and films. Influencing and mentoring his talented middle son Jaime, in the art of living the creative life. Since the age of 2, Jaime knew he loved music and wanted to pursue the musical life.

As a youth, Jaime heard his Dad sing and play piano most days and nights, unless he was out teaching. Young Jaime knew from the very beginning that music would be his career and life long passion.

Christmas 1968, at the age of 6, Jaime’s uncle bought a set of drums for Jaime’s older brother Seth, and soon the drums because the focus of attention. With one younger brother, Renny, and one older brother, Seth, in the house, the drums became a popular way to get Dad’s attention and the boys would jam with Dad at every opportunity.

As a youth, Jaime remembers playing the drums to please his Dad and both he and his brother Seth learning piano and drums.

On the family turntable, many days and nights were spent jamming with the recordings of The Beatles, Aretha Franklin, The Temptations, Stevie Wonder and most of the popular recording artists of the day. Music was and still is, a family business!

In 1972 when Jaime was 7, Lady Luck appeared and Jaime was called in to audition for the Broadway show “PIPPIN”. 400 kids showed up. Three call backs later there were 4 kids left and Jaime was one of them. At the last audition, lo and behold, the great Bob Fosse was there himself and Jaime was chosen to be the understudy for the role of “Theo” at the Imperial Theatre on Broadway.

Jaime stayed in the show for over a year and in 1973 the family decided to retain talent manager Selma Rubin. Their relationship was fruitful and Ms. Rubin arranged many auditions which were successful and Jaime began to be featured as a actor/singer in many national commercials.

He made appearances for Wonder Bread, Hardee’s Food Chain, Timex Watches, Double Trouble, Super Sugar Crisp, One A Day Vitamins, Burger King, Hershey’s Hot Cocoa Mix and many more. He has performed in over 100 on camera commercials.

His skateboarding associations include the originators of the sport,

An original member of the SOUL ARTISTS OF ZOOYORK Skateboard Division, whose president was Mark Edmonds (aka ALI,  as he is known in the graffiti world) and mentored by Paul Sanchez, Wesley Boxce, and others.

Shut Skateboards in NYC sponsors Jaime and he stays active in the sport and actively mentors New York and New Jersey youth today.

At 19, Jaime started studying drums with Sammy Ulano. Mr. Ulano was a great reader and player and taught many students from 1935 to 2005, when he retired.

1978 brought Jaime a starring role in TV Movie DADDY, I DON’T LIKE IT. Featured also in the film were Raymond Barry, Talia Shire, Clinton Allmon, Melanie Griffith, Anne Lockhart, Beverly May, Doug McKeon and others.

In 1989, Jaime teamed up with notable drummer and educator Tommy Campbell. Known for his musical relationships with master musicians like Dizzy Gillespie, Sonny Rollins, John McLaughlin, Jimmy Smith, Tania Maria, Gary Burton and a host of other jazz greats, Mr. Campbell inspired Jaime to create his own style and drumming concepts. They maintained a “drum room” from 1989 to 1993, exploring the many facets of funk, swing, hip hop and many other styles. Also in ’89, Jamie on drums, opened for Bill Cosby at Harrah’s in Lake Tahoe.

This period led to the establishment of Jaime’s “street band” called NEW HYPE JAZZ in 1993. The band worked often and gathered a large following.

Never one to rest, Jaime opened a jazz club in Brooklyn, NY in 2005. The club, PUPPETS JAZZ BAR, featured local talent and national acts and was a fermentation ground for musicians of many styles to come together and influence each other’s music. Located in the trendy neighborhood of Park Slope, real estate became too expensive and the club closed in 2011.

Affoumado is ceaseless in his creative flow. Growing restless with sitting behind the drums, Jaime decided to return to singing, composing and producing. His newest venture is THE AFFAMILY BAND.

AFFAMILY encompasses many styles, but is essentially an alternative pop band. Their 1st release is called PERSONABLES and is available on CD Baby, iTunes and all digital media.

Spoken Words on “Too Much Negativity” and “Edward” are by Winky Flythe. All other music and tracks are written and performed by Jaime Aff.

A creative force on the move and a restless innovator Jaime Aff brings all his talents to this new band. His exciting singing and lyrics proclaim positivity. They are dynamic, joyful,  and volatile. Always celebrating the positive attitude that gives life energy and makes living playful and evolutionary supportive.

Perfect for the times we live in.​